Getting through this thing called life 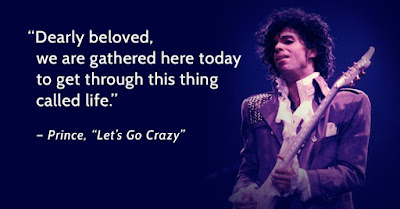 I should be working right now. I have clients who are expecting stuff from me. So, apologies there. I'll get back to you soon. Promise!

The sudden death of Prince yesterday morning has turned everything upside down. I've been able to get back to work periodically by shutting off my social media feeds. This, however, is nearly impossible when social media is one of the tools that you use to earn a living. So most of the last two days have been consumed with me consuming a non-stop stream of Prince related material: tributes, personal reflections, videos, news reports. It is what social media does best, creating community out of a far flung network of friends, associates and the friends and associates of friends and associates. (Read it slowly. It does make sense.)

It also raises questions. What does it mean when you are brought to tears, like I have been repeatedly over the last two days, by someone you don't really know? The answer lies, I think, in the power of art, but it also lies in each of us and how we have reacted to that art. In the case of Prince, everything - his music, of course, but also his style, his attitude, his willingness to be confrontational, his honesty that masqueraded itself as fantasy, his spirituality, his sexuality - was his art.

I loved Prince. No, let me change that to the present tense. I love Prince. Because, for most of us, Prince is a collection of impressions forged through media. Even those of us who were lucky enough to see a live performance, well, that's what it was, a performance, those impressions brought magically to life for a brief time. And all of that still exists, even if only in our minds. Hell, in the coming days, months and years there will be even more. So, yes, I love Prince. Present tense.

I find writing somewhat difficult. I'm methodical. I relentlessly self-edit. Words might tumble out of my fingers, but they will be sliced and diced a thousand times before anyone gets to read them, and even then I'll have regrets. This is not a particularly useful trait in the internet and social media age, where being first is a prized advantage. As a consequence, you'll never see long Facebook posts from me about anything. I just don't trust myself enough to rush anything out there.

But the last 24 hours of reading other people trying to make sense out of their grief over Prince's death has been quite amazing. Reading them has provided me an insight into who they are that I previously lacked. One was from a work colleague from two decades ago. A gay African-American man in his 40's (dude, I'm sorry if I'm guessing wrong) who has since moved to New York, wrote a long and illuminating post that said, in part, "I think PRINCE was the first being who I recognized did not give a single f*uck what you thought about him. I remember in the 80's being more than a little afraid of PRINCE. He exuded a black gender bending sexuality that dared you to look. He confronted my own awakening queerness with a bravery I didn't possess. And he not only made it ok to be other, he rejoiced in it."

A third friend is a filmmaker and undoubtedly the biggest Prince fan I know. You know that language that Prince invented, the one that substitutes pictures, numerals and single letters for words? A week hasn't gone by in the last decade where I didn't see a post of his that employed that vocabulary. Of course my friend is posting about Prince regularly, but mostly upbeat stuff accompanied by statements of faith and, dare I say it, joy. Perhaps he is masking his grief, or, equally possible, perhaps he understands Prince in a different way than the rest of us. But I've also noticed something else, a community of people I don't know at all reaching out to my friend to offer him condolences, like you do with family.

Another was a re-purposed Twitter post from someone that I don't even know: "Thinking about how we mourn artists we've never met. We don't cry because we knew them, we cry because they helped us know ourselves."

And, finally, a brief exchange that I had with a fellow culture writer whose work I enjoy. We found ourselves on different parts of the Bowie-Prince continuum. I love Prince, admire Bowie. For her, the other way around.

So, why do I love Prince? I have to look to the 80s and where I was when I first became aware of him. So, where was I? Pretty much right where I was born, the south side of Chicago, and already a veteran of what we used to call the "record business". Totally into music, mostly rock but also R&B and even some disco. And I was getting divorced and working in a dive bar, taking advantage of my huge record collection, using it to fill a tiny dance floor.

And Prince filled that damn dance floor, this sexy music from this ambiguously but very sexy little dude writing songs with a fearless freedom that my own life lacked. I saw the world a little differently after hearing Prince. With 1999, Prince seemed to peer into the future, see the apocalypse, and respond with hedonistic joy. Good news for all of us facing our tiny, private apocalypses every day. By Purple Rain he was already working both sides of the spiritual/sexual divide in astonishing fashion. It was a great soundtrack for a pretty chaotic time of my life, and it helped me find my way.

I generally respond to music feet first. If it doesn't make me want to move, then I have to consciously set my internal machinery to appreciation mode to give it a fair listen. Prince, of course, had this covered. I was hooked from the first four bars and had plenty of time later to admire its complexity and innovation. And that, I think, is why I merely admire David Bowie. It's no surprise that I actually like his Young Americans and Let's Dance stuff better, even if it's not acknowledged as his most creative stuff, even when I know Heroes or Ziggy are superior albums. To me, Bowie always felt like a method actor inhabiting and discarding radically different roles. An amazing artistic achievement, to be sure, but not one that spoke directly to my rock & soul aesthetic the way Prince did.

But I gotta give some props to David Bowie.

Little Richard, Jimi Hendrix and James Brown are often cited as Prince's antecedents, and even a casual listen brings all of those to the surface pretty quickly. Bowie's music would seem to be the antitheses of these, a deliberately artful construction designed for the head, not the body. But the outpourings that came in the wake of Bowie's death earlier this year have a remarkable similarity to those I've read in the last two days: Bowie made it OK for me to be me. I can't help but think that Prince saw that too.

Adios, sweet Prince. I'll see you in the after world. 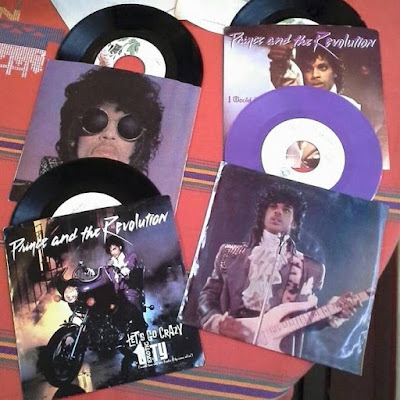