Orbert Davis and the new faces of Cuba

As I entered Chicago's Auditorium Theatre on a blustery Friday evening, I believed that I was quite prepared for what I was about to see and hear. Orbert Davis and his Chicago Jazz Philharmonic was presenting an ambitious new project, "Scenes From Life: Cuba!" in collaboration with one of Havana's top music schools, the Universidad de las Artes (ISA). My expectations were shaped by the fact that I had been tracking the project for several months and had very recently interviewed Davis about it for a preview article published at Agúzate, the blog of a Chicago-based organization dedicated to Afro-Latin music and culture.

Here were my expectations: I would see, working together side by side, Cuban music students and their American professional counterparts. I would hear the CJP's unique form of orchestral, third stream jazz. I would hear some Cuban music. I would go home happy.

A few days earlier, 37 young music students and a school administrator had arrived in Chicago from Havana. It was, for all of them, their first trip beyond Cuba's borders. The project had its origins in two trips that Orbert Davis made to Cuba in 2012 and 2014. It was on the earlier trip that he first encountered the school and its talented students. The return two years later was for the express purpose of collaborating with the school for a performance at the Havana Jazz Festival. Davis brought a few key members of the CJP with him: Steve Eisen on winds, bassist Stewart Miller, Leandro Lopez Varady on piano and drummer Ernie Adams. To say that they are among Chicago's best jazz musicians sells them short. Rather, it's more accurate to say that they are world class musicians who happen to call Chicago home. Along with Davis's trumpet and direction, the five conducted workshops, master classes and rehearsals in the days leading to the Havana concert. The idea was that the students would "become" the CJP for a day, filling out the 40 or so chairs normally occupied by the orchestra's string, woodwind and horn players. 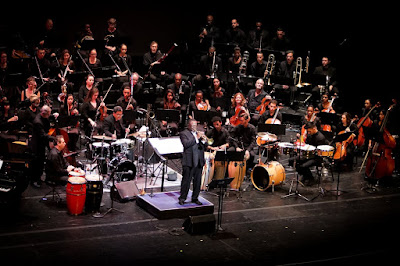 Smack dad in the middle of those rehearsals, something happened. You could call it coincidence. You could call it divine providence. Whatever it was, on December 17, 2014, Presidents Raúl Castro of Cuba and Barack Obama of the United States simultaneously went on TV to announce the beginnings of normalized relations between two governments that had quite literally been enemies for over 50 years.

I use the word "government" very much on purpose, because the people of each country have had no shortage of interest and affection for each other over the years. It would appear that, finally, the politicians recognize this essential truth and are taking significant steps to catch up with their citizens.

Again, I knew all of that when I took my seat in the concert hall. And I still wasn't prepared for what came next.

It starts with a backdrop of colonial Havana suspended over the orchestra, superimposed with an image of the U.S. flag. It is a huge orchestra, made up of, I'm guessing, 80 or so musicians from Cuba and the U.S., and they are performing the Star Spangled Banner together. As we reflexively do in this country (and, I suppose, in countries everywhere), the audience stands for its national anthem. Some sing along, others put their hand on their heart like they were taught in grade school. Then, with barely a pause, the flag of Cuba appears alongside that of the U.S. and the orchestra plays La Bayamesa, the Cuban anthem. The audience is momentarily confused, having already started to sit down. Everyone, though, is quickly back on their feet, showing their respect for the students and the country they came from. 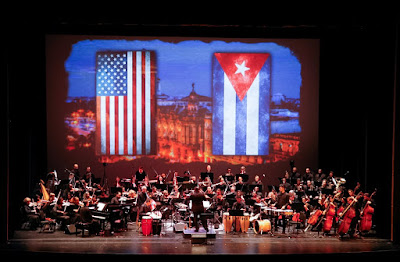 My eyes are slightly moist as I sit down, and Davis, like a proud father, takes the microphone to share his enthusiasm not only for the project, but also for the students themselves, whom he has clearly come to love. The formal program begins with a version of of Davis' composition Diaspora, which appeared on the CJP's debut album 10 years ago. In some ways, the African diaspora is at the heart of this project. The slave trade forcibly brought Africans to the United States, but far more were brought to Latin America. Orbert Davis and the Cuban students are descendants of these diverging journeys, just as jazz and rumba are its cultural flowerings. The 'proud father' reference is apt, because in a very real way, Davis and the young Cubans are having a family reunion. Trust me, when all of that comes together with the mighty sound of an 80 piece orchestra, the effect is truly profound.

The diaspora plays a part in the evening's second selection as well, Chicago @173, which Davis composed for his score to the documentary DuSable to Obama: Chicago's Black Metropolis. The first part of the title refers to the city's first resident, Jean Baptiste Pointe du Sable, a free black man, likely from Hispaniola, the island just to the east of Cuba that is now home to the countries of Haiti and the Dominican Republic.

The first half of the concert concludes with five movements from Havana Blue, the project that first brought Davis to Cuba in 2012. It was written in collaboration with choreographer Frank Chaves and presented by the CJP and River North Dance Chicago in 2013. That concert was easily one of the best performances that I saw that year, but this time around, by subtracting the dancers and adding 50 or so musicians, it was, for me, a far more powerful musical experience.

After intermission, Davis came out to say that we could, basically, throw our programs away. Some time between the students' arrival on Monday and today, the first three songs were scrapped in favor of the CJP leaving the stage entirely to the young Cubans, dubbing the segment "Postcards From Cuba," with each song spotlighting a different Cuban rhythm. First, a string quintet absolutely killed on a rendition of Cumbanchero. Then, the rest of the students came out for a rhythmic Guaguanco, followed by the drop-dead gorgeous bolero Quiereme Mucho that brought one of the violinists out of her regular element for a beautifully sung lead vocal. Finally, a spirited Guantanamera in which several students took turns putting down their instruments so they could dance to the guajira-son. 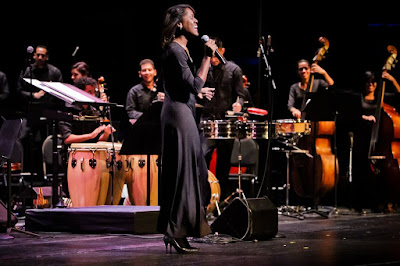 I should, I suppose, say something about the musical talent of the students, because it was, from time to time, jaw-droppingly good. Violin players, reedists, trumpeters and percussionists all took turns soloing. For me, the violinists were especially noteworthy. You just don't hear that much swinging violin outside of a Regina Carter concert (although in Chicago we are blessed with James Sanders and his Latin jazz ensemble Conjunto), but one after another, these kids stood up and swung with total assurance. It no doubt helps that Cuba has such a strong charanga tradition, but still... Oh, and the three Cuban percussionists... The CJP has a certified maestro conguero in Joe Rendón, but he spent a fair amount of the evening proudly watching his young charges do most of the heavy lifting.

The entire CJP+ISA Orchestra came together for another powerful take of an older CJP tune before the night's premiere, Scenes From Life, a work composed especially for this collaboration. This new work perfectly captured the essence of everything the collaboration stood for: Davis' third stream jazz/classical aesthetic matched to Cuban soul and sensibility. It occurred to me quite suddenly that I was hearing something unprecedented: An 80 piece orchestra roaring with the power and finesse of  Machito's big band in a piece every bit as ambitious as Tanga, Mario Bauzá's famous Afro-Cuban Jazz Suite.

Nope, I wasn't prepared for that, either.

The evening ended with the joyous jam session Orlando's Walk, also written by Davis for Havana Blue. I think pretty much everyone took a solo on this one. OK, I exaggerate a bit, but there were a lot. This included Davis, whose trumpet spent much of the evening on its stand, but he had the time of his life trading choruses with two young Cubans for several minutes.

All good things must end. A long standing ovation and countless on stage hugs finally gave way to the audience filing out of the hall with a marked bounce in their step. But I still had one more unexpected experience in store. Two of the students had family in Chicago that they had never met. Such was the crime that was the 50 year separation between often hostile governments. Witnessing this actual family reunion gave me hope for a world that, on this particular Friday night, was just learning the horrific news of the terror in Paris.

Chicago has benefited from the tours of several Cuban greats in the past couple of years. Together, the legends that are Orquesta Aragón, Buena Vista Social Club, Los Van Van and Chucho Valdés represent generations of Cuban music dating from both pre- and post-revolutionary eras. With Scenes From Life, we now have a look at the faces of a brand new era.